The marine environment is a dynamic system that shows high variability due to natural and human-induced phenomena. The various pressures exerted by humans on this environment (harvesting organisms, pollution, coastal development, etc.) have increased over the past few decades causing major changes in marine ecosystems and their uses, particularly in coastal areas. 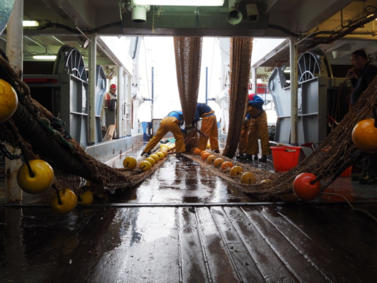 In the current context of global change, one of the missions of IFREMER is to tackle two major societal issues: the sustainable development of fisheries and aquaculture and the development of the potential of marine biological resources.

The catch potentials of fish, molluscs and shellfish in marine and continental ecosystems reached their maximum two decades ago. According to the FAO (SOFIA 2012), the reported fish catch worldwide is roughly 90 million tonnes per year (88% from marine waters) with 68 million tonnes intended for human consumption, compared with 60 million tonnes produced through aquaculture.

New elements influence the sustainability of fishing. The Common Fisheries Policy (CFP) reform aims in particular to control the capacity of fishing boats to avoid overcapacity with respect to the actual fish stocks. It plans to progressively impose landing all catches including bycatch, encourage regionalisation of management measures, reinforce the participation of all stakeholders, fight illegal, unreported, unregulated (IUU) fishing and create a unique European maritime and fishing fund (EMFF). One priority of the CFP is to decrease fishing pressure and maintain it at levels that correspond to the maximum sustainable yield (MSY).

One ambition of the new CFP is to align it with the environmental pillar of the European integrated maritime policy: the Marine Strategy Framework Directive (MSFD). Its strategic objective is a comprehensive and integrated approach to all European sectoral policies, including the CFP. Two of the eleven descriptors of good environmental status (GES) in the MSFD concern the effects of chemical contaminants on exploited species and ecosystems, and their presence in fish and seafood.

The sustainability of fishing can only be broached by using an ecosystem approach, which considers all marine uses that affect biological resources at different levels, global change and the various pressures exerted on the marine environment. The study and sustainable use of marine ecosystems and their associated services require understanding and analysing their dynamics.

How are fish doing in Europe?

During the French presidency of the European Union Council, Ifremer partners with the Fisheries, Seas and Coasts Department of the Institut Agro, the Flanders Research Institute for Agriculture, Fisheries and Food (ILVO), and the Irish Marine Institute to evaluate the status of fish populations in Europe in 2022.

In fisheries sciences, understanding the processes that govern the structuring of harvested populations is the determining factor behind their management.

IFREMER contributes to the creation of and access to databases for fisheries assessments and research.